You are on page three of this 4-page introduction to karting data acquisition.
Introduction | Choosing a System | Software Comparison | Prices and Conclusion

If your decision for your data logger was based solely on the display and peripherals the choice might be fairly difficult. All the displays are well built and all offer pretty good capabilities to read the data off them. Once you start downloading data and using the software to analyze your performance a critical aspect in your decision of which system to for for should also come down to how good the software is.

All the manufacturers have their own software to display and interpret the data. For linux and Max OSX users you are out of luck – you’ll have to be using Windows for your data logging analysis as this is the only operating system any of the companies make software for.

We will look at and compare some key features of the different software: General Usability and Feel, Printing and Data Export, Comparison Graphs, Setup/Notes recording, and some important software features such as being able to view split times and overlays.

If you want to save your time and not read through the specifics: Aim Race Studio has very good software so you won’t go wrong. Next I prefer PI Club Expert and Unipro Analyser. Alfano Visual Data is the worst of the software packages (Edit 2012 – They have dramatically improved their software now which address some of the issues I had). Software preference however is also largely down to the person using them so it’s best to try them for yourself as well. All 4 can be downloaded online at these pages and they all include sample laps:
Race Studio 2
Alfano VisualData
Unipro PC Analyser
PI Club Expert Windows

Software Usability and Feel, and other additions:
Aim Race Studio 2 is easy to get a hang of. They also have fairly good documentation to help you get started and understand what you are able to do with the software. The general feel of the software is good. You don’t have to wait for anything to pop-up or appear. It’s easy to configure what you want to display – of the four programs the easiest and fastest to change what graphs you are displaying. All menu’s are simple to understand, and small images to bring up different reports quickly show a detailed explanation of the button when you mouse-over them. Aim adds a nice touch of being able to directly email your downloaded test file directly, rather than having to separately attach it in your email program. The others don’t offer this handy addition. It’s difficult to fault Aim Race Studio 2.

The general feel and usability of the Unipro software isn’t bad. After a bit of familiarization it is quite simple to do what you want, but some things such as selecting what to display on a graph are slightly cumbersome compared to Aim’s Race Studio. The info slide-outs on the left side for driver info and other data don’t disappear or appear very fluidly after you’ve opened them – and they don’t open with a click but rather just by hovering over them so they accidentally come in the way sometimes. It wasn’t immediately apparent that it was possible to click on part of the slide-outs to make the go away.

Unipro is hard at work on a new version of their software, and after trying an Alpha release of it for a while most of my complaints have gone away – so hopefully soon Unipro software will be at the very top along with Aim Race Studio. April 2012: The new software is great to use, but I have had issues getting it to work on certain laptops for no apparent reason (downloads don’t work despite multiple attempts at installing the drivers).

Alfano has made some great improvements to their software – it used to be clearly the worst. The export features are great now. There is a dark and light theme to chose from (before you could only print out graphs with a black background!), and the export to PDF function works very easily at the click of a button. I haven’t had the opportunity to test it out on the field so can’t comment on the download performance/features.

Unipro, PI, and Alfano software offer some form of simple kart setup recording. Particularly in the Unipro this is quite simple and intuitive to do and it also has the most options, and this will be further improved in their new software. Aim Race Studio doesn’t offer much in this regard other than kart name, driver name, comment. I personally prefer to not having all these options as it clutters the software a little bit at least in the Unipro Analyser, and there are other solutions to recording your software such as TrackTimer software or simply excel sheets and pen-and-paper – and add the critical information and changes into the comment fields available with all softwares. For simple use the Unipro setup recording is ok and might please many karters.

Overlays and Delta Time:
All 4 software options allow you to compare data by plotting two or more graphs on top of eachother. This is an absolutely critical aspect of data analysis. For example if you are able to put the speed traces from 2 laps on the same graph you are able to instantly see where the differences are.

Using an additional graph called delta-time you can see exactly where one lap loses time to the other lap. 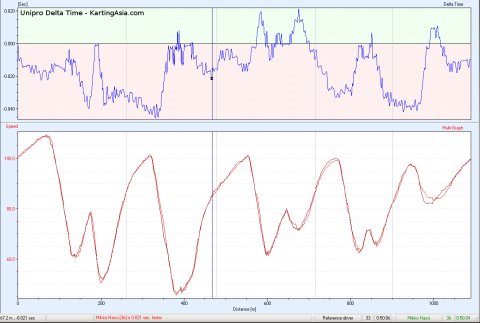 All the software versions have the Delta-Time function, also called Compare-Time. What it does is plots a graph of the difference in time of two laps – you can see a continuous plot of when one lap is faster or slower than another lap. This is one of the most useful features used in data logging software.

While all of the softwares can display delta-time, there are differences in how many overlays they can display. Luckily all softwares are at least adequate in this area. Alfano provides 3 at the most – this is suitable for most applications, although a few more to find general trends is useful. Pi allows you to plot 1, 2 or all laps from a session as does the new Unipro software with one additional compare-lap as well. Aim handles this very well allowing you to select from two sessions and more than enough laps per session.

Pi, Unipro, and Aim are all able to overlay laps from different sessions (separate downloads) – I wasn’t able figure this out with Alfano. This is a big oversight if it really isn’t possible.

All have the option to display a list of all laptimes with their splits and also tell you the theoretical best lap. There is a bit of variance how many splits are possible with the different systems but they are all adequate for most users. It’s down to personal preference which solution of displaying the splits you like best.

It’s very important during data analysis to be able to zoom in and out of the graphs and then easily return to the standard view again. With Unipro it was quite easy to zoom into a specific section, although in their multi-graph view it wasn’t possible to zoom back to full view – this was an oversight and has been fixed for the new version due out soon, which also includes an additional useful magnifier option.

Getting a map of your track is useful to get a view of the track so you know exactly where you are as you are scrolling through the data, and to split the lap into section. One more functionality is to be able to overlay data on a map to get a visual representation.

All but the Unipro software offer track mapping – this is because Unipro doesn’t currently have a G-force sensor. Track mapping typically uses g-forces and speed to plot a map. This will be available very soon, and the features look very good, such as being able to overlay various data on the map.

Aim’s software comes out on top here compared to Pi and VisualData. It’s very easy to overlay data (such as speed, rpm) on top of a map in a color-coded way.

Aim Race Studio handles printing extremely well, and is miles ahead of both Unipro and Alfano software. Whatever you have displayed in the program such as an RPM comparison graph is printed in a clear manner with general information displayed on the top such as session name, date, track, vehicle, notes, and a small track map if you have mapping capability or have added a track map. The base color is white for easy reading off a sheet of paper. Printing out a list of all laptimes in a session is also very simple, as is any other info you are able to view within the program.

Data Export is also very good in Race Studio 2. You can export in CSV, Motec (CSV), Bosch LapSim (CSV), txt, and excel. Aim’s Race Studio export functionality is easily the best of the 4. PI and Unipro both have good excel export. And Unipro has it’s own report files.

Alfano VisualData is severely lacking in this section. Once you figure out how to print a graph (right-click and print) you end up with only the graph (no additional info such as date etc), and it is printed as it looks in the software with a black background! This slows down printing and wastes ink, as well as making it difficult to view the data particularly if you are running even slightly low on black ink. I was unable to figure out how to print a list of all laptimes (right-click print wasn’t available in the laptime view). Data export doesn’t appear to be possible in any form.

While it is lacking in the export functionality PI Club Expert offers very good printing – choose the graph or table you want to print and it prints out a similar to MyChron sheet but with slightly more info on the top such as the laptimes and best laptime of the session.

In Unipro’s new PC Analyser the printing capabilities will be improved to be on par with Pi and Aim, and the export capabilities are extremely good.

Next Page: Conclusion, Which One is the Best?

Permanent link to this article: http://www.kartingasia.com/data-acquisition-software-comparison/