You are on page two of this 4-page introduction to karting data acquisition.
Introduction | Choosing a System | Software Comparison | Price and Conclusion

Which data logging system should you purchase?

Now that we’ve covered the very basics of data logging and what you can use it for, hopefully you’ve convinced yourself (or your dad) that you really do need to splurge a bit for a data logging system. We’ll now go over what you should consider when choosing a system.

Now because we are talking about data logging, we won’t consider the lower-end models which only display data but don’t provide the possibility of downloading the data (which are perfectly viable solutions for a racer on a budget – as long as you have a temperature sensor which save you a lot of $$ if it prevents an engine seize).

So the minimum capabilities we are looking for are:

The big three karting data logging companies that offer products in the “affordable” price range are Alfano, MyChron (AIM), and Unipro. In addition to this there is PI-Research with their X-Kart system which is in a price point and performance level above the other three. We’ll go over what these different products offer.

The main considerations we will look at when considering the different loggers and models are:

So this means we will not look at the cheapest options such as the Alfano Fun or MyChron Light which offer only lap timing for example.

Alfano, MyChron, and Unipro all offer both magnetic and infra red timing options in all their models. However it is a consideration you have to make when purchasing the system. Judging from their online information PI Research only offer the infrared option, no reply was received via email when I asked them about this.

The systems have to be triggered at the start of each lap by either a magnet-strip in the track or by an infrared beacon that you place beside the track. The magnetic option is more convenient because you don’t have to remember to put your infrared beacon on the track and take it back at the end of the day – however the tracks you drive at must have a magnetic strip installed. If you know that all the tracks you are going to be driving at have the strip installed then there is no point choosing the infrared option as it is less convenient and more expensive as you have to purchase the beacon, so go with the magnetic sensor. If you are going to be at tracks without a magnetic strip then you have no option but to use the infrared method.

Unipro also has a “loop” option. Which uses a similar sensor to the magnet version. They recommend this as the most reliable option as it is less likely to suffer from vibrations. The problem however is that there has to be an active AMB timing loop on the track.

Now lets get down to more specific details of the different manufacturers and their models. 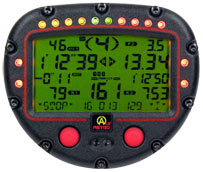 Models from Alfano which meet the minimum requirements (rpm, temp, timing) in order from cheapest to most expensive are the PRO V2, PRO+ LV, AStrO LV.

The PRO V2 offers the basic functions discussed earlier but with little room for expandability. All the sensors are compatible with the more expensive loggers so if you upgrade at least your rpm, temperature, and timing sensors will fit on your new system.

A huge drawback of the PRO V2 is its data logging capabilities. You have to put the display into a different mode if you want to record an RPM-trace of your laps, and you are extremely limited as it only records one session and for only a short session. I don’t recommend the PRO V2 if you’re interested in analyzing data beyond your laptimes. Additionally the PRO V2 only logs RPM data at 5hz compared to 10hz of the other Alfano displays. These drawbacks are the same on earlier PRO+ and PRO models which the V2 replaces.

Otherwise the PRO V2 is a robust system and good for the price if you aren’t interested in reviewing more than your laptimes and maximum rpm. It also offers 5 engine time counters, and it has warning functions for temperature and rpm.

The PRO+LV adds improved data recording as all data can be recorded at all times, and in addition to the basic functions you can also add several additional sensors: wheel-speed sensor, lambda sensor, power-valve sensor, and battery voltage sensor.

The ASTRO LV is the premier product in the Alfano karting range and offers the possibility of using a brake pressure sensor as well as a g-force sensor in addition to the sensors avbailable in the PRO+LV.

With Alfano to make a choice between the different models it is important to consider how much expandability and which sensors you will require when you purchase your first system. If for example you purchase the PRO+LV and in the future you want to add a G-Force sensor you have no choice but to purchase the Astro LV.

The reliability of Alfano dashes has been proven over the years – the things just keep working.

Aim adopts a useful strategy of a modular system in their MyChron4 data acquisition product – they have the basic functions in the display unit and additional functionality can be gained by purchasing additional add-on components. This way if you want to upgrade and start using a throttle sensor or additional temperature sensors you can use the same basic system and add-on an “eBox Extreme” for example. 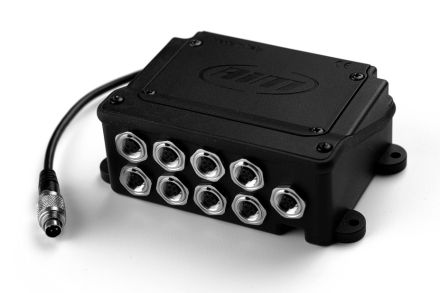 With the basic MyChron4 configuration you get the minimum functions that we discussed earlier – laptime, temperature, rpm, and the ability to download and analyze this data. It’s an affordable way to get into data logging and then easy to upgrade later.

Expansion possibilities come in the form of expansion boxes: the eBox Gold and the eBox Extreme. These offer a myriad of additional sensor possibilities including a GPS capability to map your laps. The MyChron 4 also has good engine and tyre use counters.

Alfano is launching a new system for 2012 with a lot of changes. 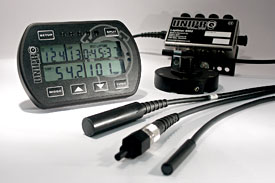 The main models to consider from Unipro are the 6002, 6003, 7002, and 7003. These are very nice systems that offer slightly limited expandability at the moment compared to the other options here. For example Unipro does not have a G-Force sensor option yet. It does offer enough options for some very serious data analysis and driver improvement. A nice thing about all the Unipro displays is that they have a separate logger-box which you mount under the nassau panel so you only have one wire going to the steering wheel. All the loggers offer engine run-time logging for 25 engines and tyre use counters for 8 sets of tyres. Unfortunately from personal experience the reliability of the additional box has not been stellar, and the same goes for the sensors.

The choice between the different unipro models boils down to two things: The different between the X002 models and X003 models is the display. The 7003 and 6003 displays are more configurable and offer more information when looking at the data in the pits than the X002 displays. You are able to run through nice graphical displays with your min/max rpm and speed from every lap for example. Otherwise the functions are very similar. The difference between the 700X and 600X displays is in the memory they have for logging data. The 700X can log data for close to 8 hours. Depending on the amount of inputs though the cheaper 600X version should get you about 2 hours – so you only need the 700X displays if you know you need data logging for long periods of time without download.

In 2012 Unipro has the Unipro UniGo model, which will change their product line quite dramatically.

The PI Research X-Kart display can display pretty much the information as the others, but it adopts a bright LED rather than a digital display display, so it is less configurable and probably takes more time to get used to all the functions than the other displays because it can’t display everything in clear text like most of the digital displays can.

They also have a modular system in which you need to add a compact logger for basic logging functionality (speed, rpm, temp, etc.) and a Delta Clubman logger for many more advanced options. There is an endless amount of sensors you can use with the PI system. Two examples that aren’t available for the other systems are infrared tyre temperature sensors and tyre pressure sensors! As mentioned before the PI system has the expandability to greater logging rates, to 50hz for example with the Clubman logger and with more $$ even more is possible. Whether or not you need more than 50hz is another thing.

Backlighting on displays
This is for fairly specific use – if you drive your kart in dark conditions such as in nighttime races with poor lighting you will want to consider purchasing a system that can offer a display with a backlight. The MyChron 4 offers this option and the PI X-Kart Dash has bright LEDs to show information.

Which display?
I like them all! The Unipro is real simple to go through and configure, while the alfano is just slightly more tricky in my opinion. The MyChron seems very handy and the USB download is a really good feature. I’d have to try the PI X-Kart to form a proper opinion, however it does look bad-ass and the display looks clearly legible.

I have extensive experience of using the Alfano PRO and the Unipro 6003 and 6002. They have all been reliable systems, and I’ve liked all of them on the track, however for me the software is just as important as the functions of display/logger when choosing one, if not even more so.

Next Page: How about the software?

Permanent link to this article: http://www.kartingasia.com/choosing-alfano-mychron-4-unipro-or-pi/