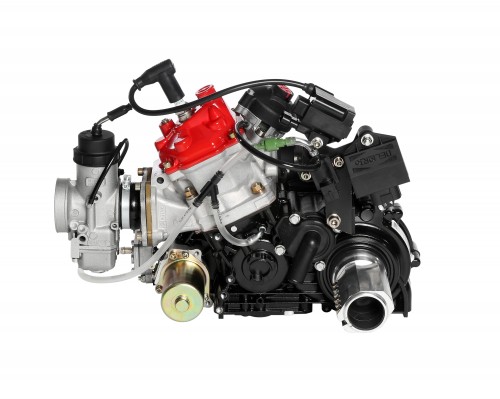 BRP presented their new series of engines to replace the current Rotax Max Series of engines. The series is an evolution of the current engines, with updates designed to increase user friendliness and ease the tuning aspect, as well as boosting the reliability and service intervals of certain components.

Technical updates include a new carburetor (which is being used at the Grand Finals), electronic box (or ECU) to control the ignition timing, an electronically timed power valve, a new battery holder unit, new exhaust system, as well as a new con rod and piston.

A lot of the upgrades have been focused on improving the “bottom end” responsiveness of the engine – which has been a common complaint. The power curves show some overall improvement so while Rotax claims that the updates don’t improve the overall performance of the engine initial track tests will reveal the actual performance difference when compared to the current generation of engines.

When asked about how he felt the new engine series would impact the hobby karter (with regards to the cost involved in upgrading) Helmut Voglsam felt that the costs savings from not having to pay for a tuner would quickly make the engine pay for itself. “We have a lot of ‘famous’ tuners here at the Grand Finals, and this is one thing that we would like to minimise. We don’t want people spending ‘stupid’ amounts money on tuners.” He continued that one of the main reasons behind the changes was to simplify the tuning of the engine/carburetor to the point where getting close to maximum performance was simple for any driver to accomplish. Parity was a key focus when developing the updates.

The video shown at the launch event explains the details:

Permanent link to this article: http://www.kartingasia.com/2014/rotax-announces-evo-engine-series/