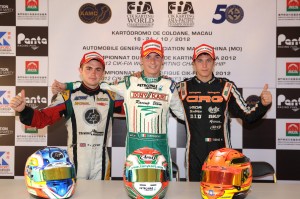 Italian driver Flavio Camponeschi became the CIK-FIA Karting World Champion at the 2nd round of the championships which were held in Macau last weekend.  His dominant form in Japan where he won 3 of 4 races for maximum points (worst result is dropped),  meant that 2nd, 4th, and 5th in Macau was enough to earn him the World Championship title despite Briton Tom Joyner doing his best by winning all 4 races in Macau, which was only good enough for 2nd in the final points table. Macau driver Andy Chang thrilled the local crowd with his impressive form taking 7th and 6th in Sunday’s race 3 and 4 respectively.

Indian driver Jehan Daruvala took the KF3 Asia-Pacific after winning the heats and pre-final. He had to fight hard in the final taking a narrow win ahead of Japan’s Marino Sato after a race-long battle and last-lap overtaking.

Although he won all 4 Races on the programme for the second Event in the World Championship, the Briton Tom Joyner has still not able to prevent the Italian Flavio Camponeschi donning his first world crown at the circuit in Macau. On the podium twice on Sunday, Felice Tiene was finally third. Also fought in Macau, the Asia-Pacific KF3 Championship was won by the Indian Jehan Daruvala, protégé of the Force India Formula 1 team.

Starting in Suzuka, Japan, in May, the CIK-FIA World Karting Championship reached its climax this weekend in Macau. After the double success of Briton Tom Joyner (LH-BMB) and an action-packed Saturday, no verdict had been reached before the last two Races of the season, scheduled for Sunday.

Race 3: And three for Joyner! 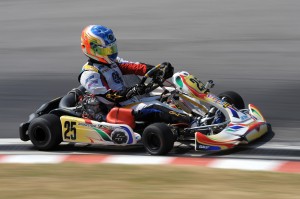 Ideally placed to take his first world title, Flavio Camponeschi (Tony Kart-Vortex) had no intention of putting himself in a vulnerable position in the last two Races of the World Championship. Posting the fastest time in Qualifying Practice on Sunday morning, he brilliantly held the advantage of his pole position at the start of the first confrontation. Behind him, Max Verstappen (CRG-TM) proved to be a little too optimistic on breaking for the hairpin and pushed the Italian off the ideal line. Receiving a 10-second penalty after the Race, the Dutchman, who crossed the finishing line in 3rd place, was relegated to 17th position. As for the championship leader, he had once again to fight his way through the pack after finishing the first lap back in 12th place. Rewarded for his efforts with the points for 5th place, Flavio was almost guaranteed the title. “Only Daiki Sasaki can still beat me, but he will definitely have to win with me scoring no points,”Flavio explained. Only 10th at the end of this Race, the Japanese Driver for the Kosmic team knew his task would be difficult…

Once again one man dominated in Race 3. Having won twice already on Saturday, Tom Joyner (LH-BMB) had such a taste for victory champagne that he grasped the opportunity of a third success. With a superb manoeuvre to overtake Max Verstappen at the end of the Race, Ben Hanley (ART GP-TM) ended his climb back from 15th place on the grid to finish in an excellent 2nd position. With Verstappen penalised, the lowest step on the podium was taken by the Italian Felice Tiene (CRG-BMB), just ahead of his team-mate Jordon Lennox-Lamb (CRG-BMB) and Flavio Camponeschi. Just outside the Top 5, Pedro Hiltbrand (FA Kart-Vortex) led the young local hero Andy Chang (Tony Kart-Vortex), who drove brilliantly on home soil, the Pole Karol Basz (Birel-Parilla), the Italian Eddy Tinini (CRG-BMB) and Daiki Sasaki. 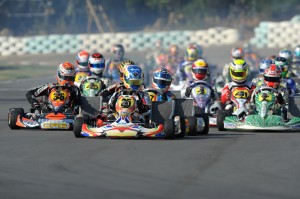 Although the title appeared practically to have been won by Flavio Camponeschi before the last Race of the 2012 World Championship, the contest for the other places on the podium was still very open. Having already taken maximum points over the weekend as a whole (only 3 results out of 4 per Event are taken into account for the final classification), Tom Joyner had no intention of missing out on another victory. Although he was forced to concede to attacks by Felice Tiene and Ben Hanley, the spearhead of the LH Racing Team soon recovered the lead, which he held to the flag for his fourth consecutive success (the record this year), logically making him runner-up in the Championship. “To put it simply, it was the perfect weekend,” said the 20-year old Briton. “I arrived here under no pressure because things did not go as I would have wanted at the first Event in Suzuka. So, on the face of it I had no chance of taking the title. But everything went brilliantly, we worked well as a team and we were extremely fast all weekend, to the point of winning four Races!” 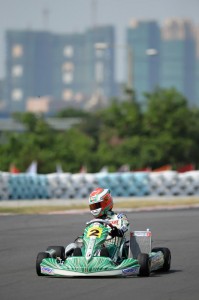 Finishing heir apparent to Joyner in the last confrontation, Felice Tiene took 3rd place in the Championship at the expense of Daiki Sasaki. Among the contenders for the title at the beginning of the year, Karol Basz ended a difficult season by climbing onto the podium despite everything. But the happiest of all was of course Flavio Camponeschi! At the foot of the podium, the 20-year old Italian nonetheless became World Champion for the first time in his career.“Naturally I’m very happy,” said the delighted representative of the Tony Kart Racing Team. “In Suzuka, I was very fast and I was fairly successful. Although I was also fast here, as I proved with my second and first places in Qualifying Practice, this weekend was more difficult. I built my title at Suzuka, but I think my best Race was the one I drove at the end of yesterday, when I climbed from 30th to 2nd position.”

With the final podium for the World Championship made up of Flavio Camponeschi, Tom Joyner and Felice Tiene, this last Race also gave a 5th place to Ben Hanley ahead of local Andy Chang, who will not be forgetting his first participation in the World Championship. Winner of a Race in Suzuka, in the opening Event, Davide Foré (CRG-BMB) saw his dreams of as fifth world crown disappear over the weekend. Classified 7th in the last Race, he took 6th place in the Championship. The Top 10 for the last confrontation was completed by the Japanese Takashi Kasai (Tony Kart-Vortex), Eddy Tinini and the Indonesian Yasuo Senna Iriawan (Kosmic-TM). 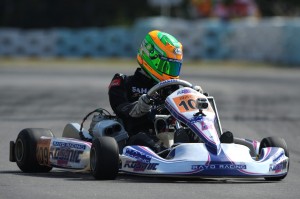 Having taken pole position, winning three Qualifying Heats and then the Prefinal, Jehan Daruvala (Kosmic-Vortex) logically then took the Final of the Asia-Pacific KF3 Championship. The 14-year old Indian, from the Sahara Force India Academy established by the Formula 1 team, did not finally take command until just 400 metres from the chequered flag. Before that, Jehan had to fight tooth and nail with Sato Marino (Maddox-Parilla). Leading at the start of the Race, the Japanese gave the Indian as got as he got when the latter took the lead for a short time. And then, when he had practically won the battle, Sato Marino made a slight mistake which cost him the victory. 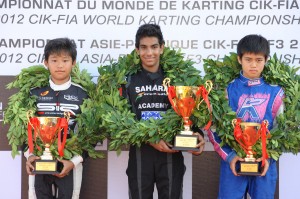 The duel between the two leaders completely eclipsed the fight among those following. Succeeding in escaping the pack mid-Race, the Japanese Joe Ishida (Kosmic-Vortex) took third place on the podium ahead of a trio consisting of the Hong Kong Driver Jacky Chan (CRG-BMB), the Thai Sasakorn Chaimongkol (Intrepid-TM) and the Singaporean Amin Noorzilan.

Permanent link to this article: http://www.kartingasia.com/2012/flavio-camponeschi-is-2012-karting-world-champion-daruvala-wins-kf3-asia-pacific-title/