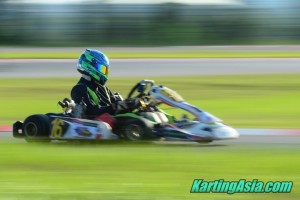 This weekend was the third round of the All Stars Karting Championship 2011 held at the newly re-opened track at Sepang, Malaysia.

Malaysian team, Stratos Motorsports, was there with Malaysian Daniel Woodroof who competed in the KF3 category.
The KF3 event consisted of qualifying, two heats, pre-final and final – all held under clear sunny skies on Sunday July 17.

Daniel qualified third in a strong field and followed that with 4th in heat 1 and 2nd in heat 2. Unfortunately a technical glitch put him way down the field in the pre-final putting him almost at the back of the grid for the start of the final. But Daniel was not to be robbed of a podium. He drove a great race in the final. A good start got him up to 6th place by the first corner. From there he worked his way through the field to second place and a podium finish.
More importantly, this gave Daniel enough points to clinch the championship title for 2011. Even though there is one more round in September, his lead is unassailable. So Daniel Woodroof is the new All Stars Karting KF3 Champion 2011.

The 4th and final round of the All Stars Karting Championship is scheduled for September 24/25 at Speedway PLUS, Subang, Malaysia.

Permanent link to this article: http://www.kartingasia.com/2011/woodroof-wraps-up-2011-championship/