« All Stars Karting Kicks Off 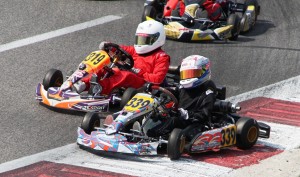 Singapore, 6 April 2011 – After kicking off the Asian karting season, James Pull travelled to Italy for his first European stint of this season, the first round of the Italian CSAI Karting Championship last weekend. Racing in the 60 Mini category at the 1.8-kilometre International Circuit Napoli of Sarno, this was the longest track that he had ever competed in. However, Pull delivered a fantastic performance despite facing stiff competition from a strong European field.

“I was very excited about my first European appearance for this year and there was a lot to learn – new team, new chassis, new engine and a new track. I faced a big challenge with the long track and I had to deal with a lot more grip as well,” Pull shared.

He added, “I was very happy with the whole trip and I learned so much from the experience. In Italy the field is stronger and more aggressive so I really had to work hard”.

Prior to arriving in Naples for the race, Pull travelled to Milan to watch and learn from the World Series Karting (WSK) Master Series round 2 in Casteletto. He then stayed on for a two-day testing with his new European team – Shox Racing Team – under the guidance of 2005 CIK-FIA Karting World Champion Oliver Oakes, along with a new Luxor chassis and new LKE engine.

With only one and a half days of testing at Naples, Pull did very well in qualifying on Friday evening where he finished sixth fastest in his group and qualified overall 10th, just 0.286 second off pole position. He even out-qualified the first and second place finishers from the WSK race held in Casteletto the week before.

With a race format of two heats and two finals, Pull started Heat 1 in 10th place but his nerves got the better of him and he only managed 16th place. Starting Heat 2 in 16th then, Pull unfortunately got clipped by another driver on the second lap and spun off the track into a ditch. Acting fast, he quickly got out and pushed his kart back onto the track, but significant time was lost and he came in 31st out of the 32 drivers.

The combined heats results put Pull in 25th on the starting grid of the first final, but within the first lap, he fought his way to 14th place. He eventually finished the 12km race in 16th place. For the second final, Pull started the 15km nine-lap race in 17th, was up to 11th by lap five, but finally came in 16th as the more experienced drivers came through.

Pull’s next race will be back in Asia with Dash Racing at the second round of the All Stars Karting Championship at the Shah Alam Circuit in Malaysia on 24 April.

2010 was Pull’s first time competing in the full season of the Yamaha SL Cup Malaysia and the Asian Karting Open Championship. Eventually finishing second overall in both series, Pull gained tremendous racing experience and he even led both Championships at certain points of the season. He also headed to Italy at the end of the summer as part of his development programme and participated at a WSK Master Series race.

Permanent link to this article: http://www.kartingasia.com/2011/james-pulls-first-2011-euro-race/