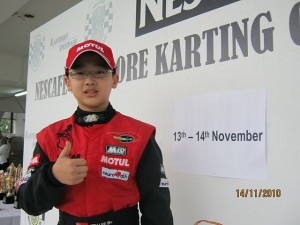 It was a double win for Jon Lee on 14 November. Not only did he clinch the top spot in the fifth and final round of the Nescafe Singapore Karting Championship, he was also crowned the Overall Cadet Champion for the season which started in April.

Despite clocking the fastest time and sescuring pole position during Qualifying on the 13 Nov, Jon was demoted to sixth position as he was penalised for crossing the white exit line thrice! At this point, Jon was a bit worried because his championship strategy has been compromised. During Heat 1 and Heat 2, Jon finished fourth and fifth position respectively.

In the Prefinal on the next day, Jon started from fifth position. In order to secure the championship, Jon only needs to come back at fifth. Nevertheless, he was determined to show his overtaking skills in this tight and twisty track. Not only did he secure the necessary points, Jon overtook all the four karters in front of him in style before taking the chequered flag in first position. Then, it started to drizzle right after lunch. The officials declared the Final race as a Wet race. Under the treacherous and tricky track conditions, Jon dazzled the crowd with his display of smooth and unparalleled driving style, scoring maximum points and emerged as Champion.

With the sweet conclusion of the last season, as the Overall Champion, Jon is very excited, he said: “I hope and look forward to get more sponsors”. He would like to thank his father who is also his mechanic, not forgetting the sponsors, Drakar Racing Team, Motul and Neuromath Pte Ltd. Next challenge for Jon would be the Yamaha SL International Challenge in Malaysia, 25-28 November 2010.

Permanent link to this article: http://www.kartingasia.com/2010/jon-lee-clinches-singapore-championship/