END_OF_DOCUMENT_TOKEN_TO_BE_REPLACED

Permanent link to this article: http://www.kartingasia.com/2011/crg-junior-team-asia-driver-calvin-wong-wins-rmc/

Singapore, 11 March 2011 – With a two-month break since his last race at the Rotax Invitational Race, James Pull has been training hard in preparation for the 2011 season. The 11-year-old Singapore-based cadet karter will be competing this weekend …

END_OF_DOCUMENT_TOKEN_TO_BE_REPLACED

Permanent link to this article: http://www.kartingasia.com/2011/james-pull-ready-for-2011-rotax-max-challenge-season/ 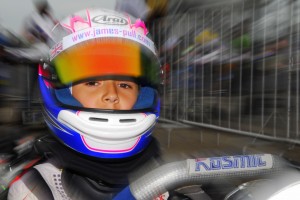 Press Release:
Dash Racing team-mates Syazwan Mohd Noor and James Pull were both impressive during the final weekend’s practice for the 2011 RMC championship which starts at Speedway Plus Circuit in Kuala Lumpur on 12th March.

In the Junior class, Syazwan showed amazing speed, setting times under last year’s pole position almost every time he went onto the track, using both his new and old GP Racing GP10. Already one of the favourites for the Junior championship, this weekend has probably established Syazwan as the driver to beat, particularly in Round 1 at SPC where he won in last year’s championship race. Syazwan said “I’m really happy with the testing and we’ve got a really good set-up for the race now. If we can maintain the same pace next week, I should be very near the front”.

In the MicroMax class, James was using his 2010 Kosmic chassis and was consistently amongst the fastest drivers all weekend, setting times close to the fastest laps from last year’s race at the track. It was a grueling long weekend for James – school holidays allowing him to practice for 4 days – with 120+ laps completed each day as the team completed a series of tests for the karts and engine combinations. James said “It was a really good test. The kart was good all the time and I managed to be a lot more consistent than I have in some practice sessions before. I’ve been working on my fitness and so I’m a bit stronger now and it’s helping a lot. I’m really looking forward to the race and it looks like I’ll be very competitive”

Team Manager John King said “It’s been a great weekend – almost too good, it always worries me when we have no problems in practice sessions. I was very happy with James – in previous tests he’s often got tired and become inconsistent on the track but this weekend we pushed him very hard and he drove well all weekend which helps us a lot with the kart set-up. Syazwan’s speed was awesome, especially with his new chassis – we only used one new set of tyres all weekend but on both days he was the quickest kart almost all the time. As long as we can reproduce the same speed and consistency, both James and Syazwan will be right in the fight next weekend.”

Permanent link to this article: http://www.kartingasia.com/2011/dash-racing-ready-for-2011-rmc-season/