National Singapore Karting Races To Be Held in Malaysia » 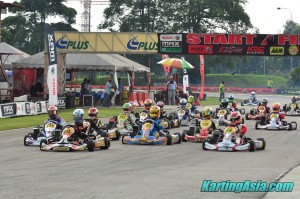 Teruhisa Tanaka (IS Racing/Japan) did just enough to win the Senior category at the second round of the Rotax Max Challenge Asia series held at Speedway PLUS in Malaysia. He held off Zahir Ali (Prodigy/Indonesia) and championship leader Calvin Wong (ART GP Asia/Malaysia).  Starting from pole position Tanaka managed to control the pace at the front, and while it looked like Ali may have closed in enough at times he never quite got close enough to seriously challenge for the lead.  It was a case of all top 3 drivers pushing as hard as they could at an incredible pace and setting very similar laptimes (0.009 seconds covered the fastest laps of the top 3).

For Tanaka and Ali it was a return to form after round one where they finished in 9th and 8th respectively. For Tanaka the win was enough to move him into 3rd place in the championship behind Lee Wai Cong with 4 rounds to go. Calvin Wong more than doubled his points lead – but it’s nowhere near a comfortable margin yet with so much of the championship left.

In the Junior category it was team Maxima drivers that were on form. Veravich Wongsanganan (Thailand) shadowed his teammate Indonesian teammate Nabil Hutasuhut for almost the entire race until making his move. Having led all but the final two laps of the race Hutasuhut had to settle for third place behind his other teammate Jakkarin Sirinonthanawech(Thailand). Sirininthanawech had a solid drive from 8th on the grid to 2nd at the finish line for a Thai 1-2. The championship standings got a shuffle as Perdana Putra Minang – winner of round 1 – was handed a 30 second penalty for overtaking in a yellow flag area. The penalty dropped him from 4th to 26th, and from what would’ve been the championship lead to 6th in the standings.

The MicroMax race provided a thrilling event with with Arsh Johany (IS Racing/Malaysia) charging up through the field after getting caught up in an incident on lap 1 and dropping as far down as 17th. He took 2nd place on the penultimate lap, and the lead from his teammate Muhammad Sidqi (Malaysia) on the final lap.  Unfortunately for Arsh, one of his many great overtaking moves was done with the yellow flags waving, dropping him from victory down to 20th and last of the finishers! The penalty promoted Muhammad Sidqi to 1st and Putera Adam Halim to 2nd. Muhammad Firdaus took 3rd with Daljit Singh(Stratos Motorsports/Singapore) in 4th with the remainder of the top 10 within 1.3 seconds behind him. 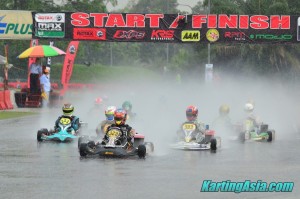 The DD2 race was the final race of the meeting, and the skies opened up just as the drivers were about to go racing. After a small delay the race went ahead in a torrential downpour with Anruparp Arphasat (Thailand) taking the lead from Senna Noor (IS Racing/Indonesia) at the start. Flooded airboxes and/or electronics meant that not all drivers had their engines ticking over as they had hoped. Senna was following Arphasat closely and finally made a move as his engine cleared, only to lose his lead a few laps later when his engine struggled to move again. Senna thought all was lost “I was already thinking about losing the race and even the championship because if felt like my engine wouldn’t go anywhere, but it cleared up enough.” Senna’s fortune turned around as his engine started to obey him better and Arphasat spun out of the lead exiting turn 1! Senna then drove home to win but only about a second ahead of masters driver Keifli Othman (IS Racing/Malaysia).

To underline just how chaotic the weather had made the race 3rd place finisher was Veteran driver Nicolas Pellerin followed in 4th by another Veteran driver Ashraff Dewal! Senna now leads the championship ahead of James Veerapen (HB Racing/Malaysia). Veerapen set the fastest lap in the final but a first corner incident dropped him down the order and because he was just ahead of Senna (almost a lap down) when Senna was given the chequered flag, he never took the chequered flag because he pit in thinking the race had finished for him as well – costing him valuable championship points.

The next round RMC Asia will be held at the Sepang Karting Circuit on the 24th-25th of May.

Permanent link to this article: http://www.kartingasia.com/2014/teruhisa-tanaka-edges-out-zahir-ali-and-calvin-wong/