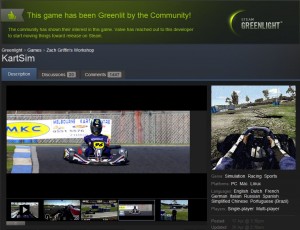 For anyone that has heard about KartSim, you may have given up hope on it ever being released after no news for years! The latest developments however look promising. The title has been Greenlit on Steam, and below is the latest statement on KartSim’s facebook page. Scroll down further for an earlier video-announcement including some gameplay footage, and the Steam Greenlight teaser. It looks like development is truly on-going, and we might get to see this title get launched!

While there is no word on a release date, releasing templates for people to get started on paint schemes and not releasing the game within a year would be a bit rude, so here’s hoping it goes live within a year!

The sim is slated for release on PC/Max/Linux, and after that possibly on console(s)! Be sure to like their facebook page and if you have steam search for KartSim on Greenlight and follow it!

After a hectic fortnight since we were Greenlit, here’s a quick update on KartSim’s progress and a big announcement.

During the past year we’ve been fortunate enough to be involved in the Unreal Engine 4 Beta program and have been working behind the scenes to port the existing prototype written in Unity, to the much more powerful, robust and feature complete, Unreal Engine 4.

So what does that mean for us all? Whilst the gameplay will only ever get better, we can now announce support for Oculus VR, Linux and Mac versions, support for modding via Steam Workshop and visuals that edge ever closer to photorealism. With the extra power available in UE4, your request to make the tyre walls break apart into individual tyres is also being worked on, which will only add to the fun factor in the sandbox mode. (Server options will be available to turn this off for more serious drivers).

We’ve also taken your feedback and will be improving the engine sounds significantly. There are a lot more features that will be announced soon, but will be keeping them under wraps for the moment.

Thanks again for all your feedback and getting KartSim Greenlit. In the next update, I hope to give you a firm release date for KartSim, which I’m sure you’ve all been waiting for.

In the meantime, since we’ve received a lot of requests to do so, we’ll be releasing templates for everyone to start working on their helmets and team tents, with an accompanying tutorial on how to texture them. Stay tuned!

Permanent link to this article: http://www.kartingasia.com/2014/kartsim-development-announcement/

Comments have been disabled.