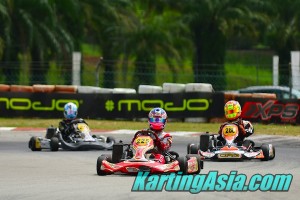 Daim Hishammudin (Singapore) and Akito Saito (Japan) took first place in the Junior and Senior categories respectively at the opening round of the Rotax Max Challenge Asia series yesterday at the Sepang International Karting Circuit. They both had to overcome qualifying in 5th place to make it to the front by the end of the weekend. Ang Kok Wee (Singapore) topped the charts throughout the weekend in the DD2 category, while Arsh Johany took the MicroMax win.

The Senior final started with Malaysian driver Calvin Wong (ART GP Asia) on pole position having narrowly beaten compatriots Lee Wai Cong and Izzat Hanif Norazlan to the line in the pre-final. Off the line in the final Calvin Wong had a poor getaway dropping to 4th by turn two, and later down to 5th where he finished as he was unable to repeat the pace he had in the pre-final.  Wai Cong took control of the race in the early laps as behind him Japanese drivers Teruhisa Tanaka and Akito Saito battled in the opening laps allowing Wai Cong to build a healthy looking lead. Saito managed to get past Tanaka and signalled to his compatriot to work together to catch the leader. Once clear of Tanaka, Saito began to close the gap to the leader, and with 7 laps to go he made a clean move into turn 2. As soon as the move had been completed Wai Cong signalled to his team-mate Saito to keep going, because he was worried about Tanaka closing in on him. Wai Cong managed to almost keep up with Saito’s, and that was enough to keep Tanaka from getting close enough, and that was the final order for the top three, with the 2nd-best Malaysian driver Izzat Hanig Norazlan coming home in 4th.

Daim Hishammudin only managed 5th in the Junior qualifying session and 4th in heat 1 on Saturday, but made progress on Sunday with vastly improved pace taking the chequered flag first in all 3 races on Sunday (Heat 2, Pre-final, Final). Daim was unchallenged in the final as he pulled out a bit of a gap on the opening lap and stretched it to 2.5 seconds by the end of the race. Malaysian driver Mithcell Cheah (Prodigy Racing) was overtaken by Muhammad Luqman Hakim early in the first quarter of the race, but it only took one lap for him to get 2nd place back, after which he built a gap but was unable to close in in Daim. Luqman finished the race in 3rd ahead of Presley Martono and Ben Grimes.

Ang Kok Wee went undefeated in the DD2 category winning all heats. The final was the closest contested, with Malaysian driver Melvin Moh  (racing on a Japanese license) setting similar laptimes but not quite able to match the pace of the race winner, eventually finishing a bit over a second adrift. Yong Boon Tirachaimongkol (Thailand) took 3rd place ahead of Kyle Blockley of Singapore.

In MircoMax Arsh Johany controlled the pace all weekend, occasionally coming under threat by Muhammad Sidqi and Christopher Daryl Wenas. In the final however it Arsh had the pace from lap one, as he pulled away from Wenas and Gezha Sudirman.

The 2nd round of the Rotax Max Challenge Asia & Malaysia series will be held again at the Sepang Circuit on the 6th-7th of April. 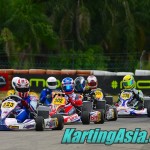 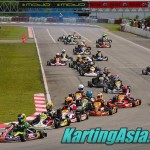 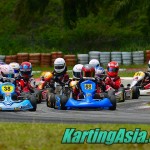 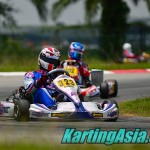 Ang Kok Wee managed to keep Melvin Moh behind him. 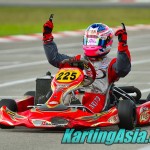 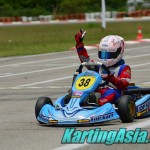 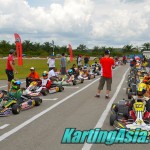 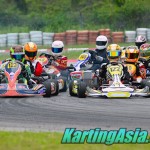 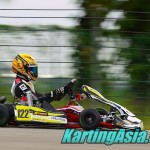 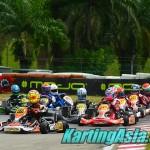 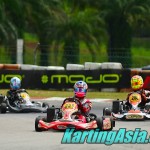 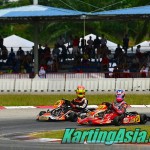 Permanent link to this article: http://www.kartingasia.com/2013/daim-hishammudin-akito-saito-battle-to-the-front-at-rotax-asia-challenge-season-opener/