The 5th and final round of the Rotax Max Challenge Indonesia was last weekend at the Sentul International Karting Circuit. Senna SN (Senior), Alroy Syadavirya (Junior), and Handi Hardja (Master) took the overall title in their respective categories. The MicroMax title went to Gezha Sudirman with just 1 point separating the top 3 in the MicroMax standings! The Senior and Masters champions will go to the Rotax Grand Finals in November, while 2nd placed Junior driver Presley Martono also earned his ticket as Syadavirya is not eligible due to his age.

A new track surface which was raced on now for two weekends in a row was tearing up a fair bit thanks to high temperatures and lots of kart on track, creating incredibly slippery conditions off-line and a challenging track to keep up with setup-wise. 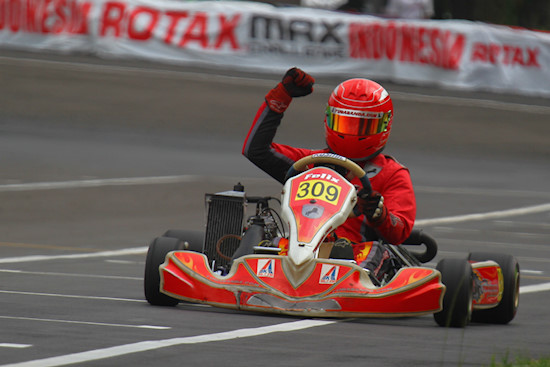 Felix Lintang grabbed his first win in 2013 after Julio Prost was handed a 5 second penalty in Rotax Senior.

After 3rd place in the pre-final Senna SN wasn’t holding back in the final, as only a DNF could put his title hopes in jeopardy. Julio Prost led the way from the start but a mistake on the opening lap let Senna through to take the lead. A few corners later however Prost gave Senna a bump into a tight corner pushing Senna into the marbles and dropping him well down the order into 8th place. Senna recovered from there to finish the race in 4th. He chased down Zahir Ali who was in 3rd but couldn’t get past. “Zahir had the pace to stay in front of me. The track was getting worse and I was struggling with it.”

Zahir’s 3rd place finish brought his 2013 campaign to an end with 4th in the final standings. Julio Prost crossed the line first ahead of Felix Lintang but the stewards handed Prost a 5 second penalty for his unsportsmanlike conduct against Senna, dropping him to 2nd place, which was enough to secure 3rd the the championship. Lintang took the top step of the podium for his first win of the year, his best result so far being 6th in rounds 1 and 4. Silvano Christian was nursing an injured right hand after a crash on Saturday, and limped home in 7th which was enough to keep him 2nd in the championship. 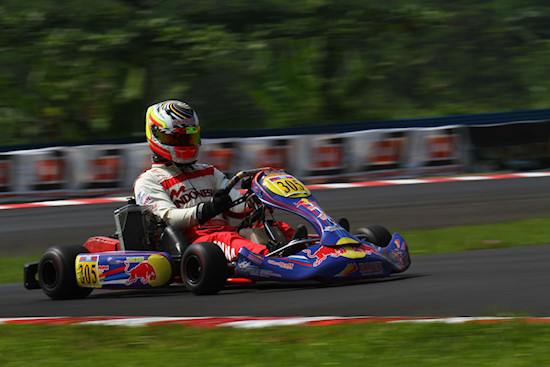 The Grand Finals appearance will be Senna’s 3rd in a row, and 4th since his first Grand Finals in 2008. Last year in Portugal he finished the final an impressive 23rd and is looking to improve on that in New Orleans this year. 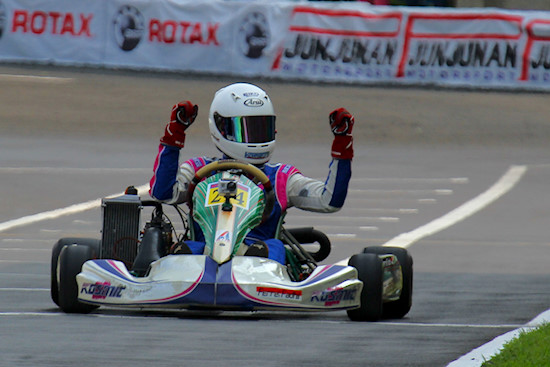 Ferrel Fadhil crosses the line after a dominant performance.

Ferrel Fadhil was the class of the field in Rotax Junior, taking a commanding win for the second time in succession. He however didn’t compete in the opening round this year which meant that he wasn’t a factor in the championship standings, but certainly would’ve been had he competed in round 1. Alroy Syadavirya came into the final round in the championship lead and managed to extend it with his 3rd place finish in the final. Kezia Santoso was in 4th early in the race but got past Syadavirya and Hugo Bradley early in the race. Syadavirya fought back and was close to Santoso but not quite close enough to get past, but his 3rd place brought him the 2013 Rotax Indonesia Champion’s trophy. Santoso’s 2nd moved her up to 5th in the final standings while Hugo Bradley finished 5th in the race and missed out on a Grand Finals seat by 6 points as he trailed Presley Martono in the battle for 2nd in the championship. Martono looked to have an easy road to the Grand Finals before the pre-final, but a DNF made things exciting as he couldn’t afford another bad race. Starting from the back he charged up to 4th place in the race and 2nd in the championship. The Grand Finals will be Presley’s first as he is rounding off an excellent rookie season in Rotax Junior with 2nd in the Indonesian series and he’s currently 3rd in Rotax Asia with 1 round to go. 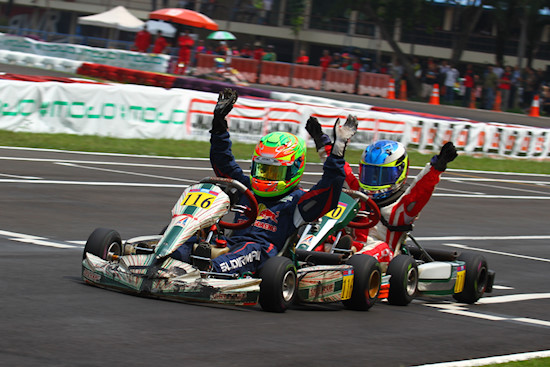 The MicroMax championship ended amazingly close with the top 3 drivers separated by a single point! Gezha Sudirman won the final round, overtaking both Muhammad Harits and Keanon Santoso to take the title. Sudirman was the underdog coming into the final round but an underperforming Santoso could only manage 7th in the final leaving him tied on points at the top of the standings, but with 1 win less than Sudirman he lost the title. Initially the top 3 were bump-drafting away from the rest of the field, but an incident dropped Muhammad Harits to the back of the field as it took a long time to get his kart back on track. Unfortunately it also dropped him from 1st to 3rd in the standings. 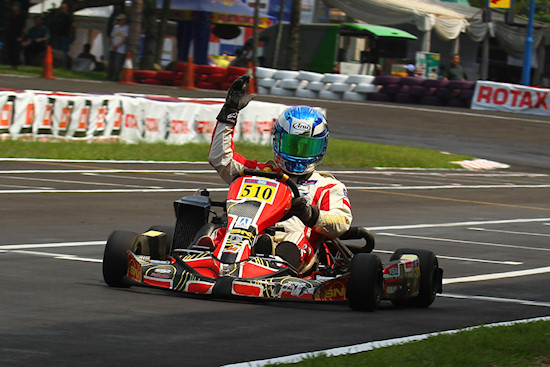 In Rotax Masters eventual championship winner Handi Hardja lead from the start but made a mistake out of T4 allowing Amir Mahpud through to take the lead. Mahpud was defensive as Hardja tried everything to get past, which allowed others to close in on the two at the front. After several attempts Hardja did finally find his way through and proceeded to build a commanding lead and win the championship in style. Amir Mahpud held on to 2nd place until the first turn of the final lap when Azis Rsimaya Mahpud charged on the inside line to finish the race in 2nd place. Unfortunately for Azis he was penalised 10 seconds for a start infringement which saw him drop to 5th behind Petrus M. Tangkawarow and Jeffry Imbrahim. Amir placed 2nd in the championship with Denny Massie in 3rd.

Permanent link to this article: http://www.kartingasia.com/2013/champions-crowned-at-rotax-indonesia-finale/