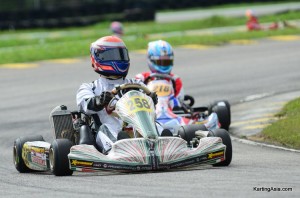 Indonesian driver Zahir Ali has dominated the opening round of the RMC Asia series this weekend at the Speedway PLUS circuit in Subang, Malaysia. Zahir took command of the Senior category from the time trial and never gave up his spot at the front of the grid throughout the weekend. In the final his toughest competitor was Japense driver Teruhisa Tanaka who held 3rd early in the race until he got passed Yoshito Matsumoto for 2nd but didn’t have the pace to close the gap to the lead.

The Juniors had a close battle with the top 3 in tight formation and switching places for much of the race. Syazwan Mohd Noor came out on top after holding off Daim Hishammudin and Jehan Daruvala.

Gezha Sudirman took a bit of a surprise victory in the MicroMax final after Prassetyo Hardja had dominated proceedings for most of the weekend. The two swapped places almost every lap in the final, with Aiman Zafri also in on the battle for the win.

Results of the finals are below. Full results are available on kkswp.mylaps.com

Permanent link to this article: http://www.kartingasia.com/2012/zahir-ali-dominates-rmc-asia-rd-1/