« Action packed racing in the Rotax Winter Cup in Spain 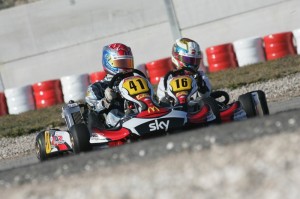 VPD Racing has made its official debut with the exciting new DR Kart at the Rotax Winter Cup in Spain over the weekend. The 2012 season icebreaker hosted by Karting Campillos near Malaga offered a great opportunity to put the new brand in the VPD stable to the test under race conditions up against some of the best drivers in the Max classes. Five times world karting champion Danilo Rossi was also there to support the team as he will throughout the year as part of the development program with VPDR.

In Senior Max, it was the defending Winter Cup title holder Ferenc Kancsár who drove his DR S97 for the first time in Spain, having no time for prior testing due to his study commitments. After a challenging qualifying getting caught up in traffic, he was 9th on the full grid for Saturday’s heat racing. The 16-year old drove consistently to qualify 7th in the extremely competitive line-up for Sunday’s pre-final, but was unlucky when several of the front-runners spun on turn 1, which left the VPDR senior having to come from rear of field. Although he managed to be quickest on track at one stage in the final while setting the 5th best lap overall, the tall Hungarian was unable to make any advance on P17.

The Junior duo racing out of the VPDR awning are a little less experienced at this level of international competition, but Ryo Hirooka and Florian Janits proved the latest DR Kart is giving them an excellent chance to be very competitive as the season gets underway. 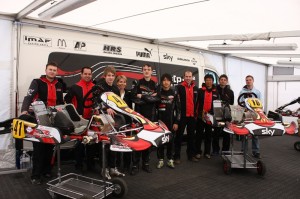 Japan’s Ryo Hirooka has been wearing the VPD race suit throughout the last season as well and is already driving the DR Kart back home in Japan now. Celebrating his 15th birthday on his flight to Spain, he had a brilliant beginning to his year by qualifying 4th in the junior field of 27 drivers. The VPDR Tokyo driver then ranked 8th overall in the qualifying heats for a row 4 grid for the pre-final, where he drove well to cross the line just outside the top 10. Unfortunately for Hirooka, he lost some positions during the fight for places in the 14-lap final Sunday afternoon, but has definitely shown his speed in the opening European event in the lead-up to a potential podium hopefully in 2012.

Junior Florian Janits kicked-off his DR Kart testing at the La Conca circuit in Italy last month, giving him some seat time before he came to Campillos for the Winter Cup. He came in underweight in the qualifying Friday, but shuffled his way through the close field of juniors to for a row 11 start in the pre-final to take the flag 2 places behind his VPDR team-mate. The 14-year old from Oberpullendorf in Austrian battled his way up to 9th in the final on what is regarded as a rather technically challenging 1,588 metre layout at Campillos, looking for every opportunity to pass and dice for positions. Janits was also 10th fastest behind some well-known Junior Max drivers to be just 3-tenths off the pace of the new Winter Cup champ.

VPDR team manager Ernst Penninger has been working closely with Danilo Rossi and their combined team of technicians in preparation for the new DR Kart’s transition into the Rotax classes with the Austrian-based team in 2012. He believes that the DR chassis lived up to its expectation over the weekend.

“The DR Kart really proved that it is a high-quality product and for us the performance will only improve as we increase our knowledge of the go-kart,” said Penninger. “Most important as well at this time is that our drivers become accustomed to a chassis that assists in making it easier for them to realistically achieve their limit. The DR Kart is more forgiving in comparison to what they have been used to with us and this is the advantage we now have. We’re very much looking forward to taking DR to the front of the field.”

Permanent link to this article: http://www.kartingasia.com/2012/vpd-racing-make-their-debut-with-the-new-dr-kart-in-spain/