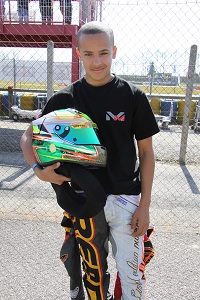 Sammy, who has spent the last few years competing in the MiniMax class in the Lewis Hamilton and Bernie Ecclestone Formula One Management-backed Fomula Kart Stars Series and in the Super One Rotax Series, will graduate to KF3 this season, one of the top British and international foundation level karting categories. The Milton Keynes-based teenager was using the event in preparation for the CIK-FIA European Championship round at the same circuit at the end of this month (April 26-29).

Following two days of testing at the track with his new team, Millennium Motorsport, Sammy began strongly and was sixth in qualifying, his best lap a 55.077s. He then claimed tenth place in the pre-final, before getting knocked off in the final, while running strongly in the top-eight.

On Sunday, the Pro Performance-affiliated youngster, had engine problems in qualifying and consequently lined-up at the back. He fought back though in the pre-final, battling his way up from 17th to ninth, only to find himself excluded due to a technical infringement.

That meant he had to start 42nd and last for the final, rather than ninth, but again, Sammy stormed back through the field.

Indeed he got up to 18th on the opening lap, only to be punted out. Undeterred, he then showed impressive pace and battled back to finish in 18th, promoted to 17thpost-race when one of his rivals was excluded.

“We wanted to do this event basically as a test for the CIK-FIA European qualifiers,” Sammy explained. “We had never seen the track before the test and we made steps forward and were very quick by the end of the weekend.

“Qualifying went really well on Saturday, but we had a bit of a problem in the final. We got taken out and we were running eighth or seventh at that point – that was unfortunate.

“We had a few problems on Sunday too, but in the final, we started last and came through to get 17th, even though we had an off at the start when I got hit. We were extremely quick though in that last race and I was extremely happy with that and with my form in general on this track.

“Overall it was a very good weekend and I feel it will stand me in good stead for when we go back there later this month.”

Sammy now heads to Sarno in Italy this week to test ahead of the opening round of the WSK Euro Series at that track on April 12-15. The 14-year-old will also compete in the UK this season too, running in the Super One MSA TKM Series that commences at PF International on April 21-22.

“I have a busy month ahead of me, but can’t wait to get started with Millennium Motorsport. They know exactly what they are doing and I think they are exactly what I need to do well in my first year in KF3,” Sammy continued.

“I am especially looking forward to going to PFI this month. We have done quite a lot of testing at PFI. It is the first round and we are extremely fast there – very, very fast. We will be looking for a win.”

Sammy’s father and manager, Emil, meanwhile was pleased with his son’s form at Varennes, and emphasised that the goal was not so much results, but to gain mileage and experience.

“The racing was very physical and extremely competitive. The local lads were clearly fast and obviously had an advantage, but through Sammy’s dedication, grit and focus to get to the front, I think he put in a sterling effort over the weekend,” Emil added. “It was unfortunate there was a technical infringement which meant he started at the back in the final on Sunday, but we were very encouraged with his progress in the class.

“I look forward to seeing him make his way up the grid, and given this was only his second race in Europe at this level, I am extremely encouraged by his pace, his performance and his dedication.”

Permanent link to this article: http://www.kartingasia.com/2012/samuel-oram-jones-enjoys-strong-warm-up-for-first-season-in-kf3/