Daim Hishammudin Back On Track After Round 4 of RMC Asia »

The 4th round of the Rotax Max Challenge Asia & Malaysia series was held over last weekend at the Sepang International Karting Circuit. The Seniors had a change at the front of the championship standings, while the 8 to 12 year old MicroMax racers provided the most exciting race of the event.

The MicroMax final had a thrilling finish with the top 6 drivers battling throughout and finishing within 1.6 seconds at the end. Gezha Sudirman (Indonesia) pipped Prassetyo Hardja (Indonesia) to the line by just 0.035s after a move to retake the lead on the final lap. The two were followed closely by Nazim Azman (Malaysia), Presley Martono (Indonesia) who held the lead for 9 of the 15 laps, and Jakkarim Sirinonthanawech (Maxima/Thailand). 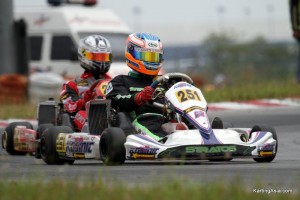 Silvano Christian (Indonesia/Stratos Motorsports) overcame a DNF in heat 2 and moved to the front of the Rotax Max Challenge Asia standings ahead of Zahir Ali (Indonesia/Prodigy Racing) with victory in the final. Aggressive overtaking moves in the pre-final moved him all the way up to 2nd from his mid-pack starting position. In the Final starting alongside Teruhisa Tanaka (Japan/Simon Racing) Silvano got the jump and after a short battle for the lead with Yoshito Matsumoto he created a gap for a comfortable win ahead of Matsumoto and Tanaka.

The DD2 battle was between Mithun Ganatra (India), and Mikko Nassi (Malaysia/Stratos Motorsports). Ganatra got the jump on the start and Nassi kept close in the opening laps but dropped back to 1.3s behind by the end as Ganatra upped the pace. Championship leader Riki Tanioka took 3rd place, but had his points gap reduced to only 5 points ahead of Ganatra with 2 of the 6 rounds remaining. 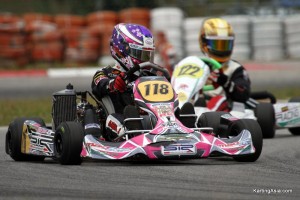 The Rotax Challenge Asia & Malaysia series has a break until September when the drivers will head to Pekan, the royal capital of Pahang, Malaysia for round 5.

All Photos by Ben Leong

Permanent link to this article: http://www.kartingasia.com/2012/rotax-asia-rd4-sepang/