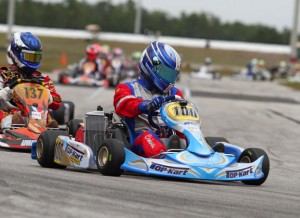 February 12, 2012 – After competing in his first career Formula Kart Productions Florida Winter Tour (FWT) event and standing atop the podium, Texan pilot Mason Chelootz will look to do the same this coming weekend.

Traveling to the Homestead Karting Complex for rounds three and four of the Rotax program, Chelootz and his Ocala Gran Prix powered Top Kart will once again look to best the rest of a talented field of Rotax Senor drivers.

“This will not be my first time to Homestead,” expressed Mason Chelootz. “I competed there back when the CKI program was around

and had good success. The Florida Winter Tour’s competition level is second to none and to run at the front of the field is something to be very proud of.”

Taking home a pair of top tens including a convincing victory at Palm Beach International Raceway (PBIR) in mid-January, Chelootz will once again be paired with long-time tuner and former racer Tony Loniewski. A potent duo with tons of success at the World Karting Association (WKA) Manufacturer’s Cup, the pair will look to garner points and stay in the hunt for the series championship.

Chelootz added, “There is a lot on the line in Florida. Not only do all drivers have the chance to race national, international and world champions, we are all fighting for an invitation to the Rotax Grand Finals later this year i
On the strength of his opening round victory, Chelootz currently sits third in the Rotax Senior championship, a mere 42 points out of first place. With valuable points on the line over the double race weekend format, the Top Kart driver will try and decrease the gap before the final weekend of action in March.n Portugal.”

Mason would like to thank Grand Products, Top Kart, Hytorc of Texas, Comet Kart Sales, P1 Engines, Ocala Gran Prix, Koene Racing and his tuners Tony Loniewski and John Wiegand, as well as his parents for all their hard work and continued support.

Permanent link to this article: http://www.kartingasia.com/2012/mason-chelootz-looks-to-continue-momentum-in-homestead/