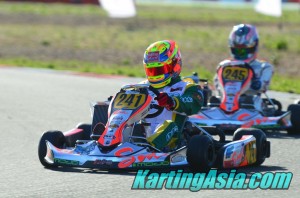 The final qualifying session of the day ended a few minutes early as all the drivers aborted their effort when the track got slippery from a quick shower, but all categories managed to set their times on a dry track. The Junior and Senior sessions were the closest with the top 28 and top 29 qualifiers respectively fitting within half a second.

The Indonesian duo of Senna SN (39th) and Silvano Christian (43rd) were both slightly disappointed with their qualifying performance in the Senior category, and need to move up the grid a few spots in their heats if they want a direct route to the final stages. Japanese driver Yoshito Matsumoto has raced with both in the Rotax Asia Challenge, and set a similar time, putting him 41st overall. Malaysian driver Nik Azri had a tough time setting the 64th best time, and will need to make large improvements to challenge for a spot in the final.

The racing gets underway tomorrow with a total of 16 heats scheduled, and the MicroMax category gets their first taste of the track this week. 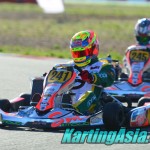 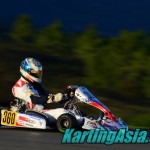 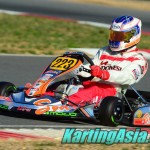 Permanent link to this article: http://www.kartingasia.com/2012/lehane-borlido-de-ruwe-and-martin-on-pole-position-at-rotax-grand-finals/