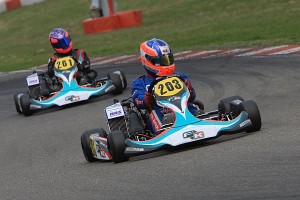 Against a large and quality-packed field of nearly ninety competitors, Brand gave notice of his intent with a respectable 8th-fastest lap in timed qualifying. He followed this with two 3rd-place finishes in the preliminary heats, plus a 2nd and 1st, putting him 4th overall in the interim ranking to put him on the second row of the starting grid for the first of Sunday’s two points-scoring finals.

However his preparations for this event were somewhat hampered by agonizing pains in his ribs. With no time for a thorough medical check-up, Ed simply had to get on with the job of racing.

Remarkably, he went on to take 3rd place and set the fastest lap of the hard-fought 14-lapper. Encouraged by his ability to drive through his discomfort and still deliver a great performance, the 17-year British Super One champion then produced what he later regarded as “probably the best race I’ve ever had.”

After another fourteen laps, the top six finishers were separated by just half a second. “It was so close,” said Ed. “It was one of those races where any one of us could have won. If you made a mistake, five karts could go past in the blink of an eye.

Every mistake was punished, but the racing remained hard but fair.”

“People were telling me afterwards it was a classic and that they were saying mid-way through whoever won fully deserved to. On this occasion it wasn’t me, but I’m 2nd overall in the points table and with three rounds to go, I’m in a great position.”

Although his ribs were later x-rayed in a local Belgian hospital and nothing more serious than bruising was found, Ed has just three weeks to return to full fitness before the start of his national, Super One title defence at the notoriously bumpy Whilton Mill circuit, near Daventry on 28/29 April.

“Whilton’s not ideal when you’ve got bruised ribs, but it’s pretty much my home circuit so naturally I want to put on a good show. A lso, I switched teams, chassis manufacturer and engine tuners in the closed season and I’d dearly like to give Protrain, Formula K and HRS Racing Engines a first big win of the season. What’s more, I’d like to make history by winning back-to-back titles with two entirely different set-ups. That would be very special.”

Permanent link to this article: http://www.kartingasia.com/2012/ed-brand-euro-title-contention/