« STRATOS MOTORSPORTS STARTS 2012 WITH A PODIUM FOR DANIEL WOODROOF

Daim Knocked out of Lead in Rotax Invitational 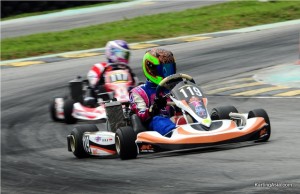 Malaysia, 9 January 2012 – It was the last lap of the 20-lap Junior final in the Rotax Invitational Race 2012 – the first karting race of the year for the Southeast Asian region – and Daim Hishammudin had the lead firmly in his hands until the absolute last corner of the track
when he was unfortunately knocked out of the race.

Just 20 metres from crossing the finish line and taking the chequered flag, the 13-year-old Singaporean of BHPetrol Racing Team lost the lead and the race instantly when his engine failed due to the impact of the crash.

Qualifying fifth in the 29-driver Junior grid just 0.112 seconds behind the quickest time trial clocked, Daim made it up with outstanding results in the heats – he finished third in Heat 1 on Saturday and first in Heat 2 on Sunday morning. Maintaining the excellent performance, Daim came in first for the pre-final and was in pole
position for the final. He led for most of the race –losing the lead briefly but fought it back – only to be hit by another driver in the closing moments of the race.

“This is the first race of the year and it would have made a brilliant start to the season with a win. It was definitely very disappointing to have been knocked off the track, out of the lead and out of the race, at the very last corner of the race just metres away from the finish line. The
impact of the collision from the other driver caused my kart to fail and hence I could not finish the race. It is upsetting but I will turn my focus to the rest of the season and the various championships that I will be competing in. The team did an excellent job of putting together an
efficient kart for me this weekend and I look forward to achieving a successful 2012,” said Daim at the end of the weekend.

2012 is Daim’s second year in the Junior category and the Rotax Invitational Race signalled the start of the kart racing season for him. His racing calendar at the moment includes plans to race in the All Stars Karting Series in Malaysia, Rotax Max Challenge Malaysia and Rotax Asia Zone
Challenge, as well as the Asian Open Karting Championship.

Permanent link to this article: http://www.kartingasia.com/2012/diam-knocked-out-of-lead-in-rotax-invitational/