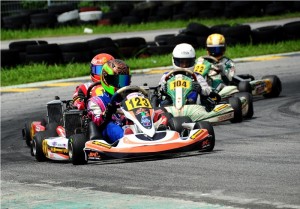 Malaysia, 20 February 2012 – The Southeast Asian kart racing 2012 championship season officially started with Round 1 of the Rotax Max Challenge (RMC) and Asia Max Challenge (AMC) held at PLUS Speedway at Subang, Malaysia on 18 – 19 February. After participating in two invitational races during the pre-season period, Daim Hishammudin entered the championship season with onfidence and did well to achieve second place in the Junior ategory of both series.

After qualifying in sixth place 0.164 seconds behind the fastest qualifier, Daim finished third in Heat 1 and second in Heat 2 to start in second for the pre-final. Daim performed brilliant in the pre-final, battling to the front and winning the pre-final. Starting in pole for the final, he unfortunately lost the lead and fought hard to regain it but had to settle for second place, taking the chequered flag just 0.361 seconds after the race winner.

“There was a chance for me to win the first round of the RMC and AMC series, but the race leader was quicker, especially on the straights and I tried my best to catch him. Nonetheless, finishing second is a good start to the season and there are five more rounds to go. The key is to be consistent throughout, so I will continue to work hard with the team to keep up the performance. Last year was my first time in the Junior category and I built quite a solid foundation. With that, I look forward to a better season with the team in my second year in Juniors,” said Daim.

2012 is Daim’s second year in the Junior category – he will be racing in the Rotax Max Challenge Malaysia, Asia Max Challenge and All Stars Karting Series in Malaysia, as well as travelling to Europe for some races to continue gaining exposure and experience from the higher levels of competition there.

Permanent link to this article: http://www.kartingasia.com/2012/daim-2nd-rmc-asia-malaysia-rd1/