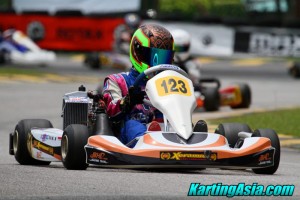 Malaysia, 19 March 2012 – Daim Hishammudin started the race weekend well with his usual quick pace at Round 2 of the Rotax Max Challenge (RMC) and Asia Max Challenge (AMC). Held on 17 – 18 March at the 959-metre PLUS Speedway at Subang, Malaysia, the 13-year-old Singaporean was in strong contention for a podium finish until he had a mistake that took him out of the running and unfortunately relegated him to the back of the grid.

Daim got off on a good note for the RMC and AMC 2012 championship with a second-place finish at the first round. Continuing his quick pace with the BHPetrol Racing team, he qualified fifth out of the 27-driver Junior field and improved on it with third in Heat 1 and second in Heat 2. The combined heat result then placed Daim on the grid of the pre-final in second. A tussle with another driver caused Daim to lose a few places and he worked his way back up, taking one driver at a time and eventually finishing third.

Starting in the second row for the final, a multiple-way fight into the first corner saw Daim drop back the order. He displayed his usual determination to battle back to the front but a mistake made during an overtaking attempt took him off track. Daim resumed the rest of the 20-lap race in last place and came in 26th finally.

“It was unfortunate that I made this error during the final. I had a good start to the season in the previous round and this will affect my championship points, but I will not be disheartened and just look ahead to the rest of the season,” said Daim.

2012 is Daim’s second year in the Junior category – he will be racing in the Rotax Max Challenge Malaysia, Asia Max Challenge and All Stars Karting Series in Malaysia, as well as travelling to Europe for some races to continue gaining exposure and experience from the higher levels of competition there.

Permanent link to this article: http://www.kartingasia.com/2012/costly-mistake-deprives-daim-of-podium/