Chris Hays at the top of practice in South Australia 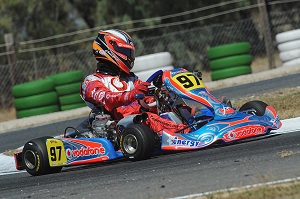 Queenslander Chris Hays has made a flying start to his 2012 campaign in the CIK Stars of Karting Series presented by Castrol EDGE by setting the fastest time during practice for this weekend’s opening round at the Bolivar Raceway in South Australia today.

The Vodafone-backed Energy Kart pilot handled the intense late summer heat, which saw a maximum temperature of 39 degrees, the best throughout the day to post a fastest lap time of 34.211 seconds. “It’s definitely a turn around from last year, and it feels great to finish the opening day on top of the timesheets,” said Hays.

“From the time we put it on the track for the first session until the end of the fifth session the Energy kart felt very good. Throughout the day we made some changes, some worked and some didn’t, but I think we’ve finished up with a fast and consistent set-up which is what matters most in this style of racing.”

Right on the rear bumper of Hays was Kosmic driver John Grother with a fastest lap time of 34.217 seconds around the 755-metre circuit.

In the Clubman category for the Yamaha Challenge James Greenwood finished as the fastest driver while Adam Willison (Light) and Michael Griffiths (Heavy) were the pacesetters in the Australian Leopard Challenge.

Qualifying and the heat races will be contested from 9:00am tomorrow ahead of the finals on Sunday.

The Bolivar Raceway is located on Summer Road, Bolivar. Admission is free for spectators.

Permanent link to this article: http://www.kartingasia.com/2012/chris-hays-practice-cik-stars/