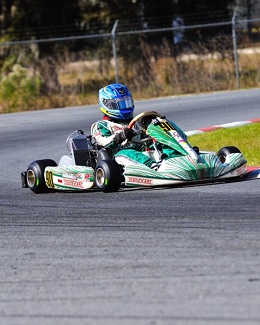 February 1, 2012 – In preparation for the upcoming Florida Winter Tour (FWT) event, Alex and Mikey Hornborg would travel to the Homestead Karting Complex for the opening round of the Florida Karting Championship Series (FKCS). Looking to start their regional series off on the right foot, both Floridian pilots ran inside the top ten throughout the weekend.

After the official test day on Friday, Alex would see action in TaG Junior while Mikey would be on track in Rotax Mini Max for the first day of wheel-to-wheel action. With larger than normal field sizes due to several competitors looking for valuable track time for the upcoming national event, the FKCS drew near record numbers and fierce competition from across North America.

After qualifying in the sixth position, Alex Hornborg would remain consistent throughout the day. Utilizing the unfamiliar Bridgestone rubber, Hornborg claimed a sixth place result in the prefinal and held station in the main event. Battling hard with competitors from around North America, Alex was happy with his result.

“I would love to win or podium,” explained Alex. “But this weekend is more about getting ready for our next big event. I learned a lot as a driver and I think the team gathered some valuable information.” 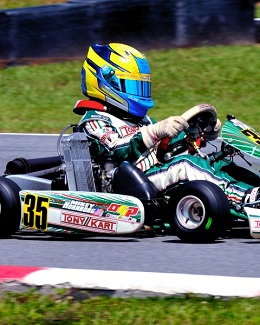 Rookie driver Mikey Hornborg would show constant improvement throughout his two on track days. After lacking the speed to run inside the top twenty on Friday’s test day, the younger of the two Hornborgs picked up the pace on Saturday with some coaching from Ocala Gran Prix team members.

Qualifying in the 19th position, Mikey began his march forward in the prefinal. Showing the speed to run inside the top half of the field, Hornborg would cross the stripe in the tenth position and garner an outside fifth row starting position for the main event. With a goal of even greater improvement in the final, Mikey fell back a few positions due to a difficult start. Working his way back forward, the up and coming driver would claim the tenth position, his first top ten in FKCS competition.

With no class for Mikey to race on Sunday, it was Alex who was back behind the wheel, this time in the Rotax Junior class. Just has he did the day before, Alex turned the sixth quickest time in the morning qualifying session and would retain his position throughout the prefinal. Striving for a podium result in the main event, Hornborg was in a tough battle with several other competitors all vying for the same piece of racetrack. Being forced off course on more than one occasion, Alex would come home in the 11th position.

The Hornborg duo will enjoy a little time off before their next event. Traveling back to the Homestead Karting Complex, Alex and Mikey will be back on track Wednesday, February 15in preparation for the Florida Winter Tour event February 17 – 19, 2012.

Permanent link to this article: http://www.kartingasia.com/2012/alex-and-mikey-hornborg-show-speed-at-fkcs-opener/