Podium for Stratos Motorsports in Kuching 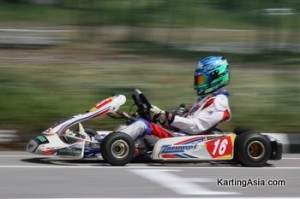 Press Release: Just under 100 karters participated in this weekend’s third Round of the Rotax Max Challenge 2011. The event was held at a temporary track at the Sarawak Stadium in Petra Jaya, Kuching, Sarawak – the first time an event of this kind had been held in Sarawak. The event comprised races for five classes – Micromax, Junior Max, Senior Max, DD2 and Invitation (Sarawak Chief Minister’s Cup).

On Saturday (June 18) the event was supposed to consist of qualifying plus one round of heats for all categories, but during the first heat (DD2 category) the surface of the track broke up badly and was deemed unsafe to continue. The balance of races for Saturday were cancelled and the organizers began to make changes to the layout of the track to eliminate the sections where the tarmac had broken up.

This resulted in a much shorter lap distance as some bends and short straights were removed. So the track for Sunday was very fast and in sections quite bumpy – hard work for the drivers. In order to finish the event at a practical time on Sunday, the second round of heats was scrapped, leaving the balance of heat 1, pre-final and final to be run.

In the qualifying sessions our best result was in the Junior category where Daniel Woodroof came 4th. The qualifying sessions benefitted drivers who prefer tight twisting tracks. There was no time to rerun qualifying on the revised track where most of these sections had been eliminated. So in the Sunday races there was a lot of overtaking as the drivers who preferred the fast straights jostled to the front of the pack.

A technical glitch with the fuel feed system saw Daniel Woodroof drop from 3rd to 21st in the Junior category heat. But in the pre-final he drove a superb race to work his way up to 10th position. He continued this driving in the Junior final and worked his way up to 3rd position and a podium. A well earned result for him.

In the final races, Guy Ermer came 7th in DD2 category. Unfortunately, Micromax contender Rory Elliott was pushed into the tyre wall while he was running strongly in third position. A sad ending for him as he had been running really well all weekend. Our other Junior drivers struggled in the final with Daniel Rao coming 20th and Harry Scott 22nd.

Stratos Motosports now looks forward to round 4 of this event which will be held at Pekan near Kuantan, July 23/24, 2011.

Permanent link to this article: http://www.kartingasia.com/2011/podium-for-stratos-motorsports-in-kuching/