All Stars Karting Kicks Off » 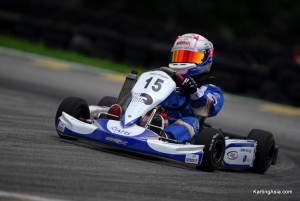 Dash Racing team-mates Syazwan Mohd Noor and James Pull marked the launch of the team’s new look with victories in the Junior and Micromax class of the 1st round of the Rotax Max Asia and Malaysia championship at Speedway Plus Circuit in Kuala Lumpur on 12th March.

In DD2 Syazwan showed very good speed for most of the weekend but was plagued by gear selection problems. In the final, Syazwan took the lead initially but the problems resurfaced and he had to retire from the race.

In the Junior class, Syazwan dominated from the start of the weekend in his new GP Racing chassis and set the fastest lap in all dry sessions and races. In the pre-final, he initially was led by main rival Gilbert Ang but passed after a few laps and gained enough lead to cruise to an impressive victory. The final was more straightforward, Syazwan taking an immediate lead and pulling away to a very comfortable win, with Gilbert again finishing 2nd. Syazwan said after the race “My GP10 was really good all weekend and I always felt in control of the races. The DD2 was disappointing but if I win next time I’ll recover most of the points lost today. It’s great to be leading the junior championship but Gilbert and some of the others are tough competitors so I have to keep practicing and improving”.

In the MicroMax class, James was 6th on the grid for the pre-final and got involved in a big dice for 2nd place in the early laps. He eventually moved clear of the pack and chased down leader Jon Lee, overtaking him with 5 laps remaining. In the final, he had a fierce battle with Luqman Hakim for the 1st few laps but eventually broke into a clear lead which opened up a lot as a big battle for 2nd slowed up all the drivers behind him. James said “Winning in RMC is a great feeling. The kart was good and it gave me confidence to be calm during the battles I was in the both the pre-final and final. Hopefully I can maintain this speed and try to win the championship”

Team Principle John King said “It’s a weird feeling – I’m almost disappointed with the results because of the DD2 but both Syazwan and James drove awesome races all weekend and both of them deserve the full credit for their wins. We’ve set the bar high so we’ll be under pressure in the next round but I’m confident the team and drivers can handle it

Permanent link to this article: http://www.kartingasia.com/2011/dash-racing-makes-winning-debut/