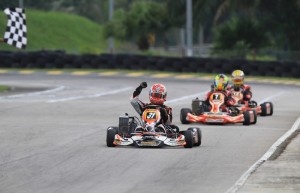 Petaling Jaya, Monday: – The new season for CRG Junior Team Asia began brilliantly when Calvin Wong dominated the Senior category of the Rotax Max Challenge Asia/Malaysia 2011(Round 1) at the Speedway PLUS Circuit.

18 year old, Calvin Wong, the driver for the CRG Junior Asia Team took the race by storm when he emerged victorious in the competitive 33 kart participants.

The success however did not came easily. Finished 6th in heat 1, Calvin upped his performance when he ended the pre-final with a 3rd place position behind Chang Mun Shien and Farriz Fauzy.

The long 25 lap final race proved worth watching when the top 3 racers bedazzled audiences and visitors from all across Asia with first class overtaking maneuvers.

Calvin was instrumental throughout the final race. Even with a fractured leg, the latter displayed sheer determination combined with a never say die attitude to earn the CRG Junior Team Asia their first Senior silverware in 2011.

As expected with the quality of racers participating, particularly the formidable front four consisting of Calvin Wong, Chang Mun Shien, Indonesian; Senna S.N and Farriz Fauzy, it will never be a dull race. Farriz however struggled and dropped down the order.

Meanwhile, things were looking brighter for Calvin when he took the lead with the other two racers who represents PDB Racing pressing him hard into making a mistake. Calvin however maintained his composure and the race finally reached its peak in the final 5 laps when Calvin pulled a half a second lead emerging as the comfortable victor in what could prove to be one of the highlights for Asia’s go-karting industry.

The team who has just undergone heavy restructuring entered the race well prepared and highly motivated when IRU1 Motorsports was appointed as CRG’s official team factory in Asia.

Meanwhile, CRG Junior Team Asia development drivers; Connor O’ Byrne and Sean Hudspeth suffered misfortunes when both had early incidents that prevented them from moving up the grade. Sean and Connor made great improvements and were impressive at times running consistently in the top 10.

Upon his victory, Calvin Wong stated; “The weekend went very well for us. We started quite steadily and improved our set-up until the final race. We also made some good changes in the final that proved helped me throughout the race. I just kept my head straight and maintained my composure as I know the pace was very tight between one another. The kart was set-up and performed fantastically especially in the final 10 laps of the race. That was instrumental in the victory today. I am very proud of this team and I would like to thank everyone for this victory.”

Meanwhile, Team Principal, Nir Iruwan Dato’ Izani said he was just proud of the team effort shown. He commented; “The CRG brand carries a winning spirit and our team’s motivation and dedication is profound by this spirit. However, success only comes when you work hard for it and that is the foundation which I want to instill to my team. The win today is a resemblance of all the tireless effort carried out by the team over the pre-season and I am very proud of every single person in this team including the drivers the technicians, my faithful partners Idzham Hashim and Er Chun Tat and also Mr Giancarlo Tinini of CRG Group who helped make today a reality. Indeed, this is a victory for all of us to celebrate.”

Permanent link to this article: http://www.kartingasia.com/2011/crg-junior-team-asia-driver-calvin-wong-wins-rmc/