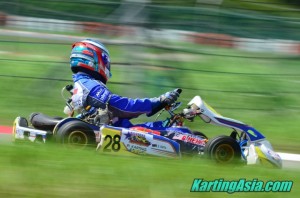 Bryan Mehta took top honors in the 125 Open category ahead of Tanapon Nokkaew at the 3rd round of the All Stars Karting Series held at the Sepang International Karting Circuit. The two are in the same order at the front of the championship with just 1 point separating them.

Calvin Wong was 1st in the Sonik Sport Asia series after winning 2 of the 3 races held today, while Daniel Woodroof wrapped up the KF3 championship before the final round after a 2nd place finish behind Daim Hishammudin. Japanese driver Ryuta Ueda was in commanding form in the Yamaha Cadets as he won both final races making it 6 wins of 6 races this year. Suhaizarul Suhaizat won both races in Yamaha Juniors bringing him to within 12 points of championship leader Jehan Daruvala.


The video cannot be shown at the moment. Please try again later.

The video cannot be shown at the moment. Please try again later.

Permanent link to this article: http://www.kartingasia.com/2011/all-stars-karting-rd3-result/