AMB has in the works a new display that karters will find very interesting. It provides more timing information than any other existing lap timer such as MyChron, Alfano, or Unipro. What more could it provide than your laptime?

Have you ever driven what you felt was a really good lap in qualifying, then come into the pits only to find that you’ll be starting the race in the middle of the pack? The AMB system allows you to know where you are as soon as you’ve set your time by tapping into the AMB system installed at the track. It will show your laptime exactly as recorded by the AMB system – and it will also show you how far you are from the the fastest laptime, as well as your overall position in the session – or if you’re in first it’ll show you how much faster you are than 2nd.

This information is obviously invaluable to a competitor. For example with your current timing information if you have set a so-so time on your first flying lap you will probably stay out for another lap or two in an attempt to improve on that time. What if your so-so lap was more than enough for pole position? If you knew this (as you would with the AMB TnetX) you could safely come into the pits knowing you qualified on pole – you are able to save your tires for the race!

There are obviously numerous situations where you can benefit from such information, and in a race the display also provides information such as your current position and your gap to the guy ahead of you. The information will make you make more educated decisions and ultimately improve your performance on track. 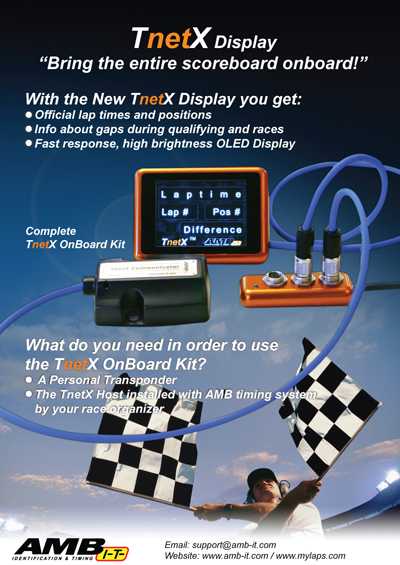 Now there are some things that don’t quite go the TnetX display’s way in my opinion – you still probably want to have your normal display/logger to record your critical data that you’re used to (such as G-forces, temp, rpm etc.)

For the system to work the AMB system at the track has to be on and it has to have the TnetX host installed as well – so you can’t expect for all events to have the system up and running for your display to work. I don’t know if the display has a fall-back such as being able to pickup laptimes from a magnetic strip if an AMB system isn’t available at the track.

The ideal system I think would be for AMB to get in touch with an established data logging company and integrate the functionality of the TnetX into a system such as the MyChron, Unipro, r Alfano – so that when the TnetX system is available you get the extra timing information but when it’s not such as on practice days you just fall-back to normal operation without having to switch displays around or needing two systems. Now that would be a kick-ass product.

Permanent link to this article: http://www.kartingasia.com/2008/tnetx-display-from-amb/